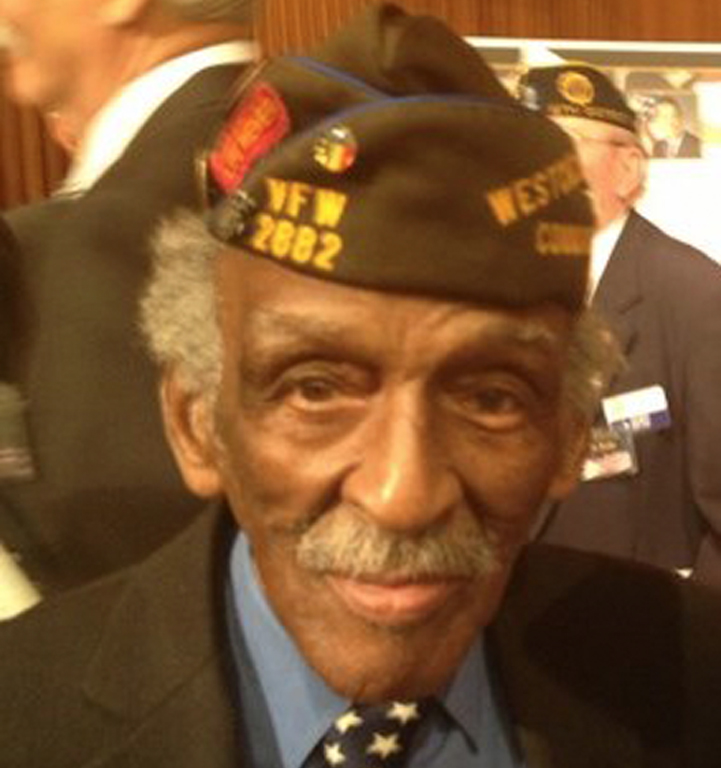 Born in New Rochelle, NY on March 26, 1915, William Francis Moye (who has always been known as “Bill” or “Billy”), attended New Rochelle schools, only leaving New Rochelle High School after his father’s death. He immediately went to work to help support his mother, who was just about in the middle of raising her nine children. The few years Bill was away from New Rochelle, he proudly served his country during four campaigns in World War II. Eugene Longhi, the historian for American Legion Post #8, provides an excellent account of the breadth of Bill’s service:

Inducted by Local S.S. Board 738 of New Rochelle, on June 19, 1942, Bill left for Fort Jay, NY. After two weeks’ leave, he passed through Camp Upton, Long Island, NY, to Camp Lee, Virginia, for seven weeks’ of Basic, as well as training as a Bugler. He played trumpet by ear. In September it was off to San Luis Obispo, California, for three weeks’ training , duty as Bugler, and assignment to 242 QM Bn. The 242nd then moved to Ogden, Utah. (Bill played with a dance band at USOs and Officers’ Clubs.)

In February, 1943, Bill’s outfit went to Fort Dix, New Jersey, for three days before sailing out of State Island on the Cristobal for “Destination Unknown.” Passing through the Strait of Gibraltar, troops received booklets on North Africa. The 242nd arrived at Oran, Algeria, for four and a half months’ duty.  There, Bill worked at Ration Dumps, served as an interior/exterior guard, and played dance gigs. In July, 1943, Bill’s unit boarded freight cars for four-day trip to Tunis, Tunisia, where they remained a few days before leaving on LCI’s for Palermo, Sicily. The 242nd spent a few days on the beach prior to a bivouac within a stadium. Loaded into DUKW’s, they headed for the Salerno landing on D-4 and continued moving up the coast, assigned to work crews, guard duty, salvage duty at Anzio-Nettuno, Civitavecchia, Venafro (operated mule parks for infantry) and Modena in the Po Valley (the 242nd became the 3256 Service Company, Quarter Master.)   Bill recalls seeing General Mark Clark outside Rome. Donald Moye, Bill’s older brother, also served in World War II. Bill made a surprise (and non-regulation) visit to his brother’s 758 Light Tank Battalion.

Bill took part in several campaigns: Tunisia, Sicily, Rome-Arno, Po Valley, North Apennines, and EAME (European-American-Middle Eastern). With Good Conduct and a WWII victory, Bill earned his rank as PFC (Private First Class).  In October of 1945, Bill’s outfit left Leghorn, Italy on a liberty ship, arriving at Hampton Roads, VA., before taking a train to Fort Dix thus completing his 360 degree journey back to New Rochelle.  Upon resuming his civilian status, Bill was honorably discharged and immediately became a Veterans’ activist, joining VFW post 2882. He served as a bugler, and later became Commander of the post from 1969 to 1975.  Bill Moye imbedded himself in the military community and in 1979-1980 he was the County Commander in Westchester and also as County Chaplain for several years. He became District Chaplain from 1984-1985. He continues to preside as Chaplain Emeritus for the American Legion Post 8 and the United Veterans Memorial and Patriotic Association of New Rochelle (UVMPA).

Still serving as the chaplain for America Legion Post #8 and the United Veterans Memorial and Patriotic Association of New Rochelle, Bill continues to deliver beautifully rendered burial and community services involving veterans.  He is enormously proud of his country and his service, and he is a dedicated member of his lifelong community. A great walker, Bill continues to shop for neighbors, help friends and strangers in need and delight all ages he encounters with stories and dance steps. His keen mind and memory, peppered with a terrific sense of humor, brings joy to all he meets. Bill easily imparts current events as well as fascinating stories of eras past, a wealth of information on home remedies passed down through generations, and wise tips from his many, many years of work in southern Westchester. At 100+ years, he remains an integral and beloved member of his community. It is New Rochelle’s good fortune to claim Bill Moye as a native son.