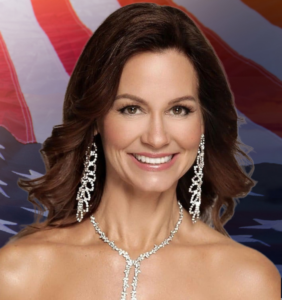 AVB2023 is honored to announce that Mrs. JeanAnne Roberts – Mrs. DC America (2020) – will rejoin the Ambassador line-up for this unforgettable evening event of comradeship for AVB2023 on Friday, May 12th, 2023 at the Gaylord Resort & Convention Center, National Harbor, MD. Mrs. JeanAnne Roberts is originally from “Almost Heaven, West Virginia”. She began her studies at West Virginia University and received her Bachelor of Arts from Marshall University in Huntington, West Virginia. After graduating, she worked as an assistant to Senator Mark Marchin, brother to United States Senator Joe Manchin. Following that, she pursued a career as a Domestic and International Flight Attendant where she traveled to over 20 different countries. She was based in Washington, D.C. In 2020, she was crowned Mrs. DC America. I went on to compete for Mrs. America in 2021. My platform is “Mentoring Young Girls to become Future Leaders through the Girl Scouts of the United States of America. she is also a bridal model, an aspiring actress, Co-Producer and Pageant Director of Mr. DC 2022, and Producer of Single in the City – DC.”

Additional information can be found: http://vivatysons.com/blog/2021/01/17/the-journey-to-the-title-meet-jeananne-roberts-mrs-dc-america/