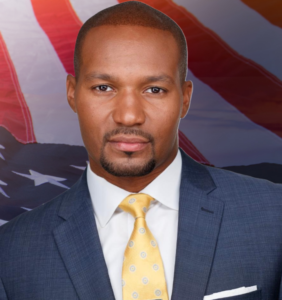 AVB is PROUD to announce that Mr. Darren M. Haynes will be the Master of Ceremonies for AVB2023. He will be joined by the Mistress of Ceremonies & The People’s Emcee, Dr. Renee Allen during this EPIC evening. Darren is an eleven-time Emmy award-winning sports anchor. He is currently the Sports Director and Main Sports Anchor at WUSA in Washington D.C.  He also anchored at ESPN. While at the World-Wide Leader, he anchored SportsCenter, ESPN’s flagship program. His career includes the Super Bowl, NBA Finals, Stanley Cup Finals, NASCAR Cup Series Championship, World Series, and more.

As a sports anchor, Darren has won numerous awards. He won multiple Emmy awards for Best Sports Anchor, Team Coverage, and Editorial and Commentary. He’s a five-time Associated Press Sportscaster of the year recipient and received the 2017 and 2018 A. P. Best News Anchor awards for his outstanding editorial and commentary. In 2021, Darren received the Lifetime Achievement Award from Wayne State University. His alma mater. In 2016, he was inducted into the Amity High School Hall of Honor and the New Haven Football Hall of Fame in his home state of Connecticut.

Darren has been recognized as one of the “Most Influential Blacks” by the NAACP. His work goes beyond sports. Darren is passionate about serving in his church and community with organizations such as Special Olympics, Muscular Dystrophy Association, U.S. Armed Forces, and INROADS, Inc. He received the “Outstanding Leadership Award” for his work with the Pregnant and Parenting Teens Program and the “Media Recognition Award” for his fight against domestic violence with the Love Life Now Foundation.

In 2007, Darren launched the Junior Broadcast Program, which has helped hundreds of aspiring journalists achieve their dreams in the media industry. His motivational speeches help individuals increase confidence and use personal power to activate their ideal life. The program currently mentors more than 500 young men and women. Darren is also the founder of Destined for Change. This program is dedicated to making a CHANGE in the world by inspiring, making an impact, and uplifting our young adults. Darren donates neckties to young men to prepare them for the professional world. His work within the community continues with the Second Chance Prison Ministry, where he helps create a plan for success for inmates at local prisons and recovery houses.

Darren graduated from Wayne State University in Detroit, Michigan, earning a Bachelor of Arts Degree in Media Arts and Studies. He’s a proud member of Omega Psi Phi Fraternity, Inc. and the National Association of Black Journalists. Above all of Darren’s professional awards and accomplishments, his greatest achievement is being a husband and father.